Come have a read at our latest blog post. You’ll be able to gather a first-hand look on some of the new features present in this BETA release.

What To Expect? A Brief Rundown

Optimisations sat at the forefront of this update’s development as we delved into ways to improve CPU utilisation when a lot of players are on screen. Everything from functions used to animate players, movement, the minimap, name tags, player markers and various other implementations in the game’s ever-growing code base received iterations. Pending that you’re not already limited by dated hardware, you will experience a better framerate.

Towards the same effort, our one-man art department embarked on optimising over 30 game levels that make part of Holdfast’s current map selection on both the naval, coastal and army war fronts to cut down on draw calls. 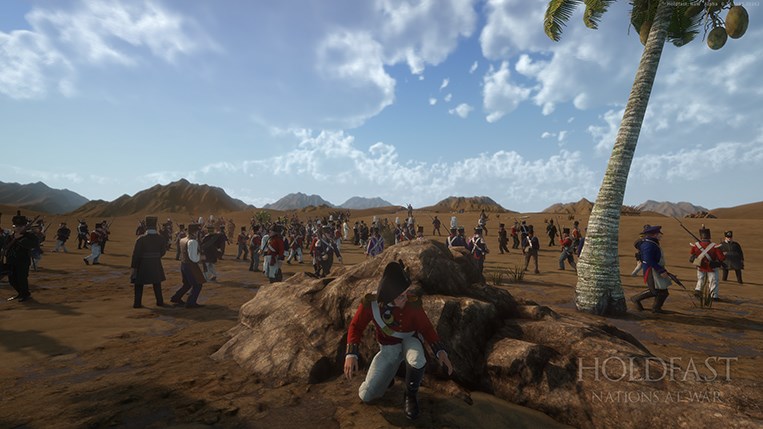 Bugs which saw an introduction due to the massive number of additions in the recent major update releases are being tackled and undergoing testing in this BETA. Work on improving error handling when a player is unable to connect to a server is in progress. We’re aware that there are still issues with this system and development will continue in the coming week to flesh things out before release.

As part of our polishing endeavours, the game’s user interface couldn’t go untouched. New additions to facilitate selection, improve upon design as well as the user’s experience. Players are now provided with the option to auto-join the round, the spawn menu has been restructured to show the attributes tab from the get-go and remain visible as players opt between different class selections, a new launch splash screen, changes to the server browser and multiple other additions. 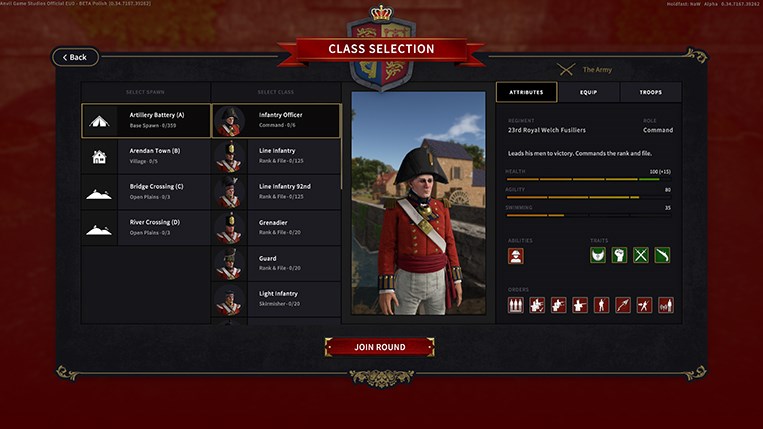 Up next are the gameplay integrity changes. Guardsmen are no longer always guaranteed to kill other classes in the rank and file with a single strike. Instead, they have been equipped with muskets that have a greater reach when compared to other classes. Due to this integrity change, we have done away with the slight differences in weapon reaches on bayoneted muskets between factions.

Grenadiers now tank less damage when hit by a melee weapon as they had their resilient trait reduced by 10%. Firearm accuracy for the Light Infantry class when crouching and firing has been increased from 10% to 13%. Those playing a support role and carrying a pistol are now provided with a chance to kill a foe with a single shot if they are only a few meters away. If you miss your target, you’ll end up in close quarters without a melee weapon equipped so choose dearly. 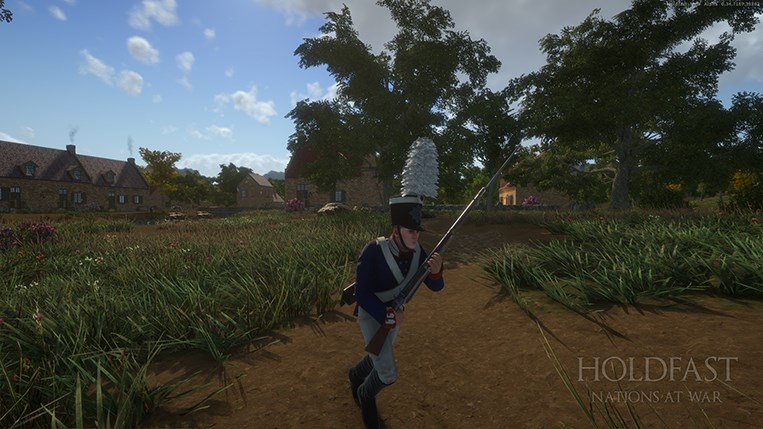 Combat mechanics will be seeing changes, bug fixes and new additions in this update. You are now able to quickly bash and stun an opponent through secondary attacks. Kick an opponent while having a sword equipped or your fists at the ready. Similarly, you can push them away when wielding a bayoneted musket, axe, boarding pike or even a flag by pressing the ‘F’ key. Secondary attacks have limited range and are only able to deal upwards to 5 damage.

We’ve also ironed out an issue which caused players rotating and striking to miss their target more often even if they were playing on servers correct to their region and using a stable internet connection. Crouching animations have been changed to help players better distinguish the direction a strike is coming from. Stun timers have also received amendments to incentives players to block after they’ve been struck by a melee weapon and managed to survive the hit. 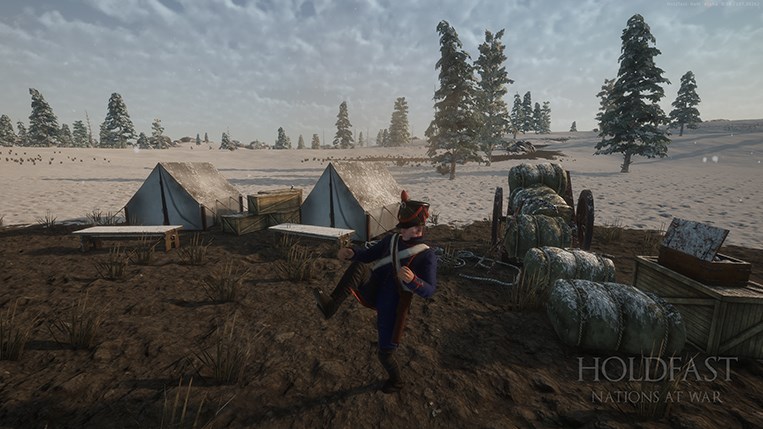 Those with a keen interest in map customisation will be pleased to hear that we’ve significantly expanded the selection of spawn-able object overrides with the inclusion of over 150 new props! Buildings, fortifications, artillery pieces, rocks, trees, shrubs and more. You’re now able to override and define your own spawn point locations on maps supporting the Army Battlefield and Assault game modes thanks to one of our recent additions.

We look forward to continuing expanding on similar functionality in future game updates. It’s been great seeing event hosts make good use of these features. Rest assured that you’ll be seeing more support from us on this matter. Have a look at our Wiki for a list of spawn-able props. 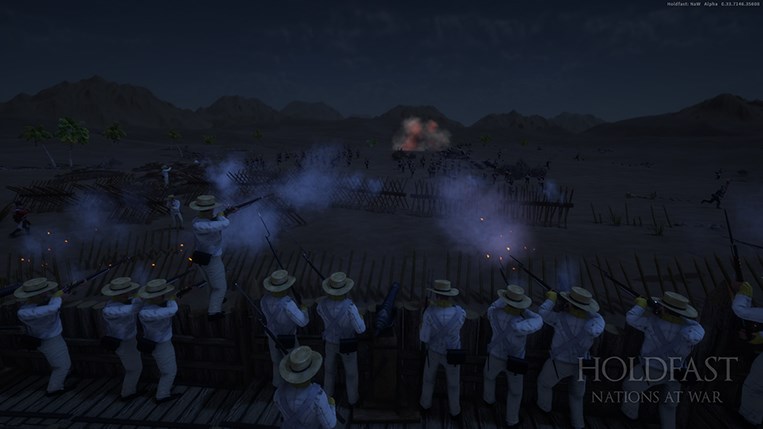 Participate In The BETA!

Would you like to have a go at what’s to come? Join us in the BETA! Hop in on our Community Discord to do so. You'll find all the details on the #announcements channel. It’s a great chance for you to provide us with feedback before the update sees a full release and help us make sure that everything is working as intended while you’re at it.

Everything present in this BETA is still a work in progress and bugs are to be expected. 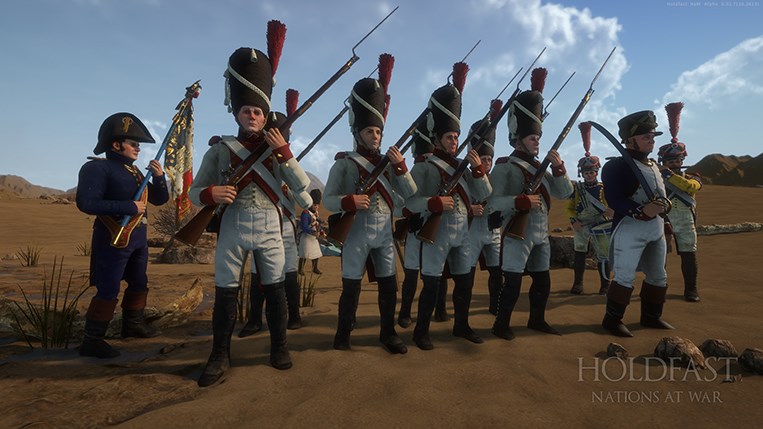 We greatly appreciate your participation in the BETA. Do let us know if you face any issues.

Once again, thank you for your support and until next time, may good health be yours.

You'll be hearing from us again soon.